Dear ForeUI users, it has been a while since ForeUI’s last update, and today we finally bring you the good news: V4.0 beta is available now!

Why beta version instead of an official release? Has this version get tested before releasing? The answer is YES, we already went through 15 iterations in alpha phase, and we are sure this beta version is usable (and much better than older versions).

The real reason that we have it as beta, is this version contains a lot of new features and enhancements, and we don’t have time to update the documents for them. Since today, we start to blog about the new features and enhancements in V4.0, and these content will also be updated to ForeUI’s documents. We are expecting to have the documents all up to date in about a month, and fix some bugs if we found any, then we release the V4.0 official version.

If you run the older version of ForeUI, you will get the notification about the new version. However you will not be able to upgrade directly in the software, instead you will have to download the new version here, then install it.

Since this version, ForeUI supports Java 7 and higher. If you are using Mac OS X, the system will not complaint about the requirement of legacy Java run-time anymore.  If you download the installer for Windows, it contains the latest Java 8 run-time (both 32bit and 64bit) in package and will install the suitable one in your system.

If you already have a license key that younger than one year (purchased after 2014.7.21), you can use that license key directly on this version. Otherwise you can use the public beta tester license key below for testing (it will be expired in about a month):

Should I Use This Version?

If you are new to ForeUI, we encourage you to use this new version. Comparing to the older versions, it is much more powerful and can do better work in the major of cases.

If you know ForeUI well, and you are about to start a new project, we encourage you to use this new version. You will feel comfortable to work with it and find the new features and enhancements very helpful.

If you are working on a old project with ForeUI, we suggest you not to use this new version to work on it. Although we worked hard on the compatibility, there are still some angles that we have not considered. If you really want to try it, please make sure to backup your plot file (ForeUI will actually do it for you, when you load the old plot in new version). In the worse case, if your are unhappy with the new version, your work on the new version can not be ported back to the older version (means you lose the work on new version, if you still keep the plot backup).

There are many new features and enhancements in this version. You can find a full list of them here: http://www.foreui.com/history/

The most obvious new feature is the two new UI themes: “Windows 8″ and “Ubuntu”. The “Blueprint” UI theme has been added to the default UI theme list too. So now there is 8 UI themes available by default. 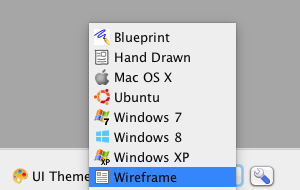 In the coming few days, we will continue blogging about the new features in V4.0. Considering the leak of document of the new version, those blog posts may be the best materials to cover these new features and enhancements. So please stay tuned

As I remember, ForeUI V2.xx has entered the maintenance phase for about one year, which means we have not added new features into ForeUI for a year.  After so many effects, we finally released the ForeUI V3.0 beta!  Now you can download it here, and feel free to let us know your feedback.

It is recommended to use the new version to create a new project.  If you want to use it on previously created project, please backup your data beforehand.  Remarks: we are still working on the documentation and resource store.

The new version offers many new features and enhancements, my previous posts (this, this, this and this) just introduced a few of them.  So today I will continue my introduction of V3.0. 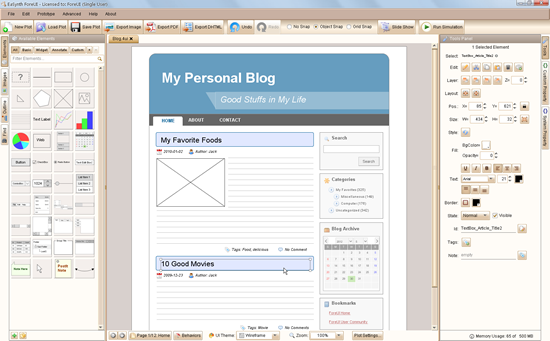 All tool windows are docked on left, right and bottom side, and you can use hotkey to show/hide them.  If you have ever used previous version of ForeUI, you will find that the GUI of V3.0 becomes even simpler.  For example, the element list on left side is simplified: all elements are listed in one panel and you can use tags to filter them.  There are many enhancements like that, and you will see.

From this version will will see a new element named “Polygon”, which allows you to create special shapes.  When you drag the element into editing area, or click the element and then click in the editing area, you will start drawing the polygon. 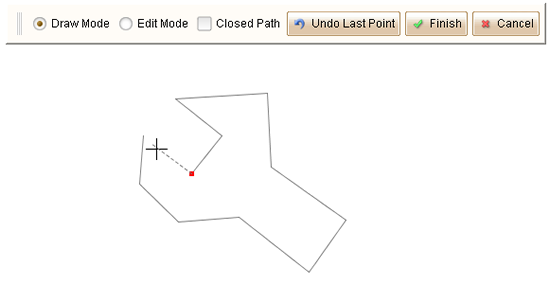 You can edit your polygon with “Draw Mode” (click to create new node) or “Edit Mode” (draw to move any node).  After clicking the “Finish” button you can then configure its background color and border color etc.

As you can see, with this flexible polygon element, you can define special shapes on your web/software UI.

Hope you will like V3.0 beta, and I will continue introducing new features next time.  If you are interested, here is a list of new features and enhancements in V3.0 beta.

As for the license, if you purchased your license for less than one year, you will be able to use your license key on V3.0.  Otherwise you will need to re-order the new license key for it (the price is raised now).

Today I am so happy to announce that ForeUI V2.00 is released!  As a major upgrade, ForeUI 2.0 is so exciting.  You can find improvements here and there, it is quite hard for me to introduce all of them.  So I will just pick a few big updates to write up. 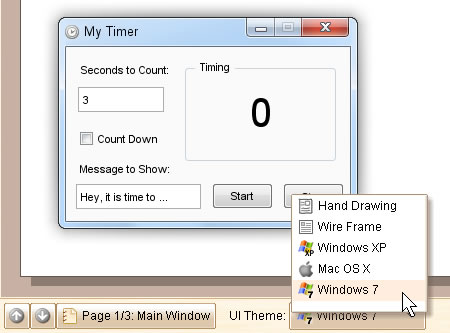 About 3 months ago, we have considered such a community site for users to share their resources.  Now the site is online!  The community site provides user a new channel to get more plot examples and custom elements.  User will be able to get new examples and elements more quickly and more frequently, since they don’t have to wait for our new release.  Please keep in mind that the community site is not only powered by us, but also by all ForeUI users.  So if you have any plot or custom element that you think is interesting or may be useful to others, please consider uploading it to the community site.  You may not get paid by submiting the resource, but you will definitely get return from the community 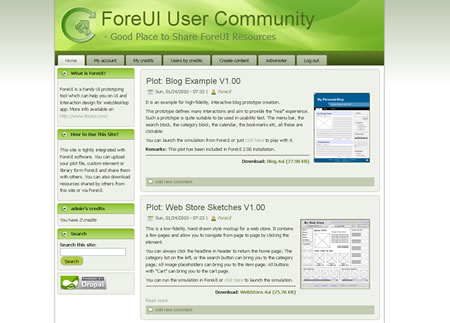 The community web site has been integrated with ForeUI 2.0.  You don’t have to visit the site in web browser, just open the community window from ForeUI via the “Resource Sharing” button (on the bottom left corner), then you can do the resource download / upload. 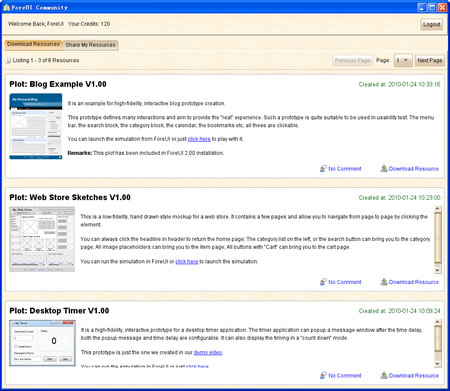 In 2.0 we implement a new page management window.  The pages are managed as tree structure, page can have its child page so that the entire sitemap structure can be built.  You can also create folder in the tree structure.  Folders can help organizing the pages, they can also control the content to be exported.  When the “Excluded from export and simulation” option is checked, all pages under the folder will not be included image/pdf/dhtml export.  This feature is useful when we want to hide the master pages from output.

Global properties are some properties that do not belongs to any element, it can be a system property (read-only) or a user defined property.  System property will be updated by system in the background, we can retrive its value when we need; User defined property can be a String or Integer, we can set its value via the “Set Global Property” action.  We can always insert a global property into the expression. 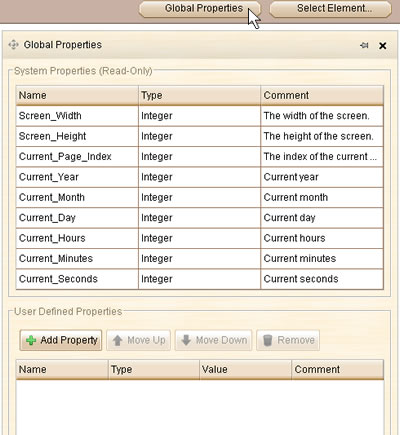 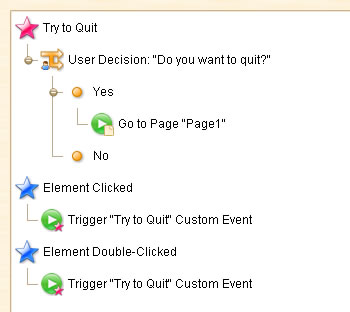 There are still many new features, enhancements and bug fixings.  I do not have enough time to introduce here, so I will list them below.

You can run ForeUI V2.00 in your browser via this URL:  http://www.foreui.com/demos/demo0/

About the ForeUI 2.xx License