This new version makes the Spinner (or say: stepper) element interactive, which allow you to specify its value in simulation.  Also this version introduces some new hotkeys to accelerate the manipulation.  7 bugs are fixed.

This element existed from the first version of ForeUI, but it was not interactive until now.  You can enter all allowed values of the spinner (one row one value), and specify the current value in editing mode.  Then you can really interact with the spinner in simulation, you can click the small up and down buttons to change its value, you can also retrieve its current value via the “value” property of the element.

You will find a new property for the current value of the spinner:

From this version ForeUI supports the hotkeys below:

Like the spinner, the ComboBox element supports the “selectedText” property now.

This biweekly release bring us the ability to simulate drag and drop in prototype.  Also it provides the enhanced Tabs and Vertical Tabs elements.  There are other new features, enhancements and lot of bug fixings, please read on.

Now with ForeUI you can simulate the drag and drop behavior in your prototype:

For simulating a drag and drop, we just need to pick 3 of them to handle.  A typical case for dragging an element to move is: Mouse Down->Global Mouse Move->Global Mouse Up.

From this version, the Tabs and Vertical Tabs elements support icon in each tab, and you can also specify the height of the tab.

This event will be triggered when any key on keyboard is released.  It will be useful if you want to catch the inputing text in edit box, the Key Down event can not do the job as the value of edit box will be updated after the Key Down event (and before the Key Up event).

ForeUI will not have any boring document (except optional daily tips).
So the context menu in plot area is also the document of the hotkeys 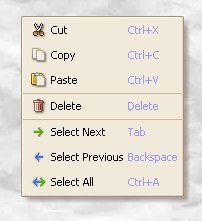