Hello everyone,  it is another biweekly update today.  The new V2.25 version has some improvements on new table editor, provides smarter zooming and proxy settings and  includes some bug fixings. 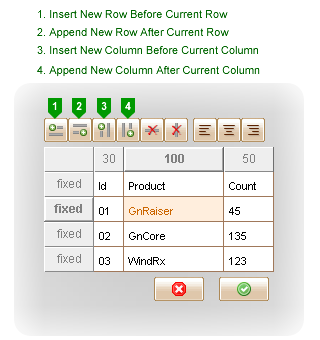 Also we’ve made an enhancement on table resizing:  only the columns with “auto” width will be scaled during the table resizing.  That means you can fix certain columns’ width during the resizing.  The columns with “auto” width will allocate their actual width from the remained space.  If more than one column has “auto” width, they will allocate their widths according to their content.  So you can add some space characters into table cell to increase its acutal width.

Another enhancement is to auto enlarge table cell (and table) if the table cell is not big enough to hold the newly embedded element.  This feature will be activated after you hold right key to drag an element into the table.  If you want to use this feature, please make sure to turn on the “Auto resize eement after editing its content” option in the settings window.

In previous version, after zooming in or out, the view will scroll back to top left corner.  If you are editing something on the bottom right corner, you will have to scroll back after zooming.  Now the zooming become smarter:  it will try to restore the center region you were working at; If you have selected some element, it will try to put them in the center of the view.

This feature is requested by Kfir Dadosh.  Sometimes ForeUI needs to get data from internet (update checking, download resource etc), so the proxy settings are needed in some cases.  Now you can find the proxy options via menu “Advanced->Settings->Misc Tab”: 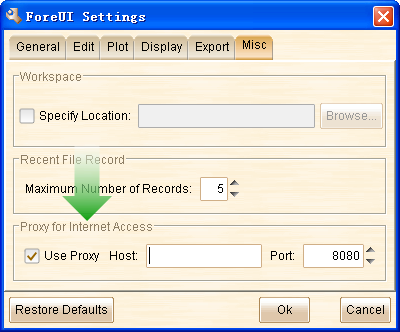 Hi everybody, it is Monday again

This time we bring you the zoom in/out feature, which will help you a lot when you want to tweak the details of the wireframe or preview the whole design.   The V2.20 also contains some enhancements and bug fixings (see below).

This feature is requested by Jeffrey Werner about 6 month ago, and we also received similar requests from other channels (email, twitter etc.).  Now you can choose the zooming scale from the list at the bottom right corner, you can also input any percentage value for zooming:

It is also possible to change the current zooming scale from the menu: 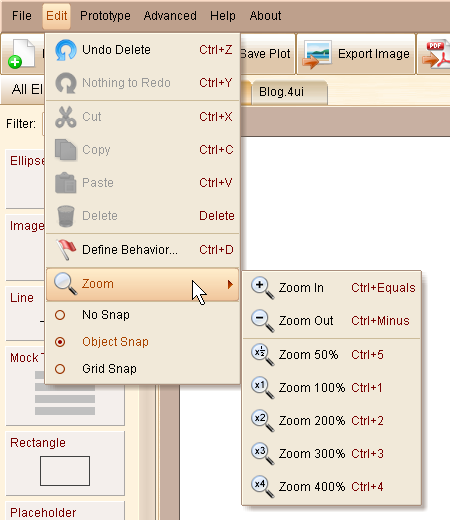 As you can see in the popup menu, you can use hotkeys to change the scale as well:

This is quite useful enhancement.  When you duplicate an element with some custom event handlers defined, if the custom event name contains the id of the element, the id part will be replaced with new id automatically.

This is quite useful if you need an element has its exclusive custom event:  just use the element id as prefix of the custom event name.  You can pack such an element into custom element, thus it can always handle its own event, no matter how many instances are created.

Here is an example.  It is an interactive slider element (you can download it from the community).  It has its exclusive custom event “TextBox_Slider_AdjustPos”, which starts with the element id “TextBox_Slider”.  So you can create as many instances of it as you want and they will not interfere each other.

In previous versions, the text editor for editing text element is not allowed to exceed the bounds of the plot.  That’s not reasonable and inconvenient.  Now we improve it a little bit and don’t restrict the text editor placement so tough: